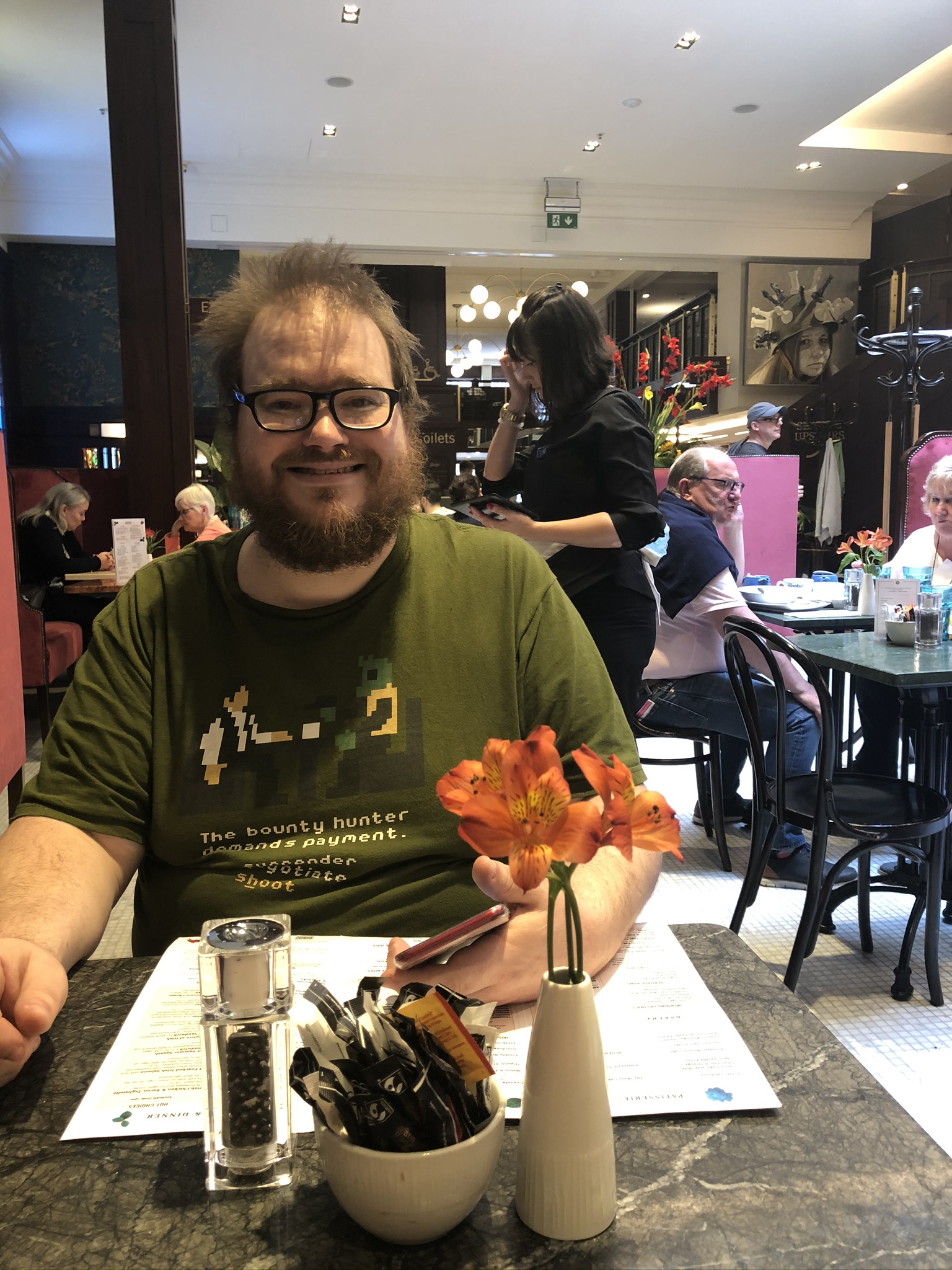 I am writing this post midway through the third day of WorldCon, which is essentially the half way point of the convention, and more than half way into the trip as a whole (we arrived on Tuesday, it is currently Saturday and we leave Tuesday coming).

This trip has had its ups and downs, but is definitely weighted more in the favour of its ups. This post is an exercise in sharing some of those good and negative experiences.

Day One – We did get to Bewleys!

My last post was written while I was on the plane headed to Dublin. Upon landing, we made our way into the city centre, and made an immediate beeline for Bewleys Oriental Cafe. Situated on Grafton Street, one of the main shopping streets of Dublin, Bewley’s is a cafe and ‘cafe theatre’, not that Michael and I have ever experienced the theatre aspect ourselves.

We know from our previous times in Dublin that we love Bewley’s tea, and prior to this trip, we have been to the cafe on Grafton Street before. So it was a must visit for two reasons!

A lot of the anxiety I had felt it the run up to and during the flight over to Ireland melted around once we had actually landed, and familiar sights made themselves known. I think the destination of the trip being somewhere familiar as certainly helped keep the anxiety at bay, as has the fact that the country is majority English speaking (other than on the TV, I have only heard one Irish speaker so far!).

Bewley’s was, as expected, wonderful. So much so we went back on Day Two!

Day Two – The One Where We Chilled

Michael and I weren’t overly bothered about doing any major sightseeing; this was not out first trip to Dublin and we did the majority of the big sights on our first visit back in 2005. So on our ‘chill’ day between arriving and the start of WorldCon, we did exactly then; we chilled.

We did go across to the venue to get ourselves registered and therefore save a bit of time the next morning. It also allowed us to scope out the bus routes, and enjoy a walk along the river Liffey.

We walked around the city centre, Michael found the Games Workshop which made him very happy, and we had our first ever Supermacs. Curry cheese fries are a revelation, let me tell you!

Our day was rounded out by picking up some groceries, and clashing our diaries for the next few days, seeing what panels we would be doing together, and which ones we wouldn’t be.

Day Three, that is Con Day One!

My first day of WorldCon started off on the right foot. Michael and I arrived in time for Star Trek Yoga, which was challenging but rewarding. I had a couple more panels, and then a migraine hit. I quickly found the quiet room, and was there for the next three hours. At 5pm, Michael took me away from the con and back to our lodgings. Rest and sleep were what I needed.

I don’t know what set the migraine off, but it ruined my first day at the con. I enjoyed what I managed to do, but I closed the day out feeling frustrated and angry. And with no one to blame…which makes it even more frustrating again.

Day four, yesterday, as a significantly better day than the one prior. I had the aftermath of the migraine from Thursday, but I could thinking clearly and see, so I could assimilate information again; huzzah!

Several months have passed since both WorldCon, and my last time looking at this blog. I had always meant to come back and finish this post, but clearly I did not!

I do not recall for the life of me why I called this post ‘the progress progress’, but I have left the title as I found it, purely for my own amusement.

WorldCon ended up being an amazing experience. I won’t go into a daily breakdown this long after the event. I will simply say that I went to many informative and enjoyable panels. I met some wonderful people, and Dublin was as lovely as I can remember it being on my previous visits.